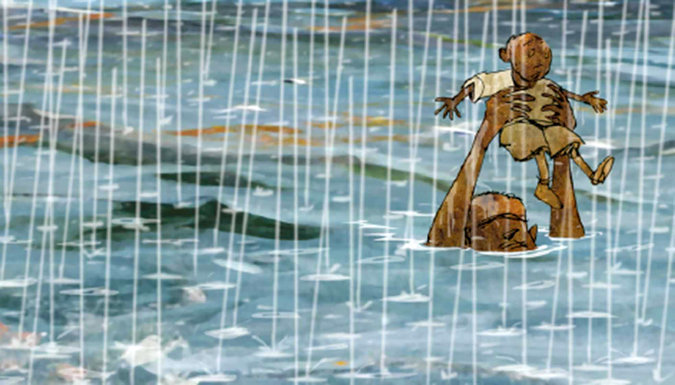 I picked up Don Brown's Drowned City: Hurricane Katrina and New Orleans when I was in New Orleans as I always like to get a couple of books about the city I travel to for the shelves. (Nothing beats getting Douglas Coupland's City of Glass in Vancouver for combining my literary and travel interests, but that's another story.)

The story of modern New Orleans is incomplete with an exploration of Hurricane Katrina, but it's a hard story to tell. There's a pretty deep ingrained narrative that the city disintegrated into chaos and murder, the idea that the disaster was unavoidable, as well as other media narratives that stand up despite evidence disproving them.

The art here is muted colors with thick lines; it's rough but human. That's a fitting style for a story that needs a mix of distance and empathy to ensure you feel the disaster as something human but isn't overwhelming to read. There's a lot of tragedy here, but Brown manages to ensure that it is a human one and not a statistical parade.

Drowned City demonstrates Katrina is not the story of a Hurricane. It's the story of failure at every level of government. It's also the story of the way that media coverage dehumanized victims, and made it okay for neighboring towns to greet suffering people with guns—sending them back to die because the media needed a narrative to fill time.

Katrina was the first big disaster after 9-11. It met a media that had managed to create an Emergency into a new way of life. Reporting rumors hadn't sunk to simply reading things of Twitter and pretending it's news, but Brown recounts the crazed stories coming out of the Superdome.

Brown can't do much to blunt the tragedy, but the humanity he fills it with allows it to be more than faceless victims failed by "the system." We get the names of the government officials that failed, and though the media and police get mentioned as a group, it's still called out as a failure.

If there’s a moment where you could spot the erosion of trust that the government even pretends to have people’s interests at heart, Katrina is it. The federal government was woefully unprepared because administrative positions were given to friends and donors. The state and city governments were either incompetent, corrupt, or both. The media was more focused on entertainment and filling time than getting the story right, and you have the essential elements that erode public trust. Brown narrates all of this deftly in this slim graphic novel.